In the frigid forests of the Northern Hemisphere, grows a super food.

Not just any super food, but the G.O.A.T. of super foods. It is the
Chaga Mushroom. This nutrient rich food can be found growing on birch
trees in northern countries that are susceptible to cold winters. Chaga
is identified by having a black woody growth on the outside, and an
orange-coloured core on the inside. In Northern European countries,
Chaga has been used for centuries as a traditional medicine. It is
thought to boost immunity as well as overall health.

What Nutrients are in Chaga?

These are some of the nutrients that you can find in the Chaga mushroom.

What are the Health Benefits of Chaga?

Loaded with vitamins and antioxidents, Chaga has been thought to help
fight certain cancers, heart disease and diabetes, although no clinical
tests have been done on humans to support these claims. The
antioxidants may also help reduce bad cholesteral. Here’s a summary of
some of the health benefits of the Chaga mushroom. 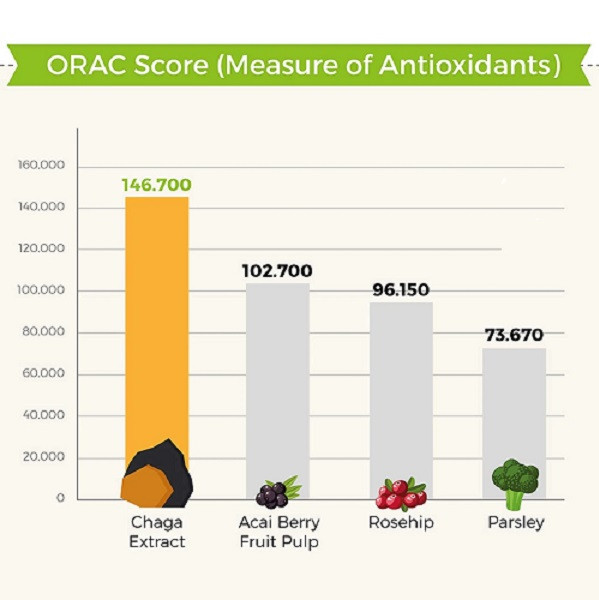 Ways to Use Chaga

There are basically 3 ways to injest Chaga, in capsule form, a Chaga
tea, or a Chaga tincture. Chaga tea is made by pouring hot water over
Chaga powder, and letting the tea steep. Not all of the health benefits
of Chaga can be realized by drinking the tea. For that , you will have
to know how to prepare a Chaga tincture.

Another way to use Chaga is for skincare. Chaga skincare products can be found in forms such as, creams, lotions and oils.

How to prepare a Chaga Tincture

Inside the cell walls of Chaga are bioactive ingredients such as beta
glucans. The walls of these cells are made of something called Chitin.
Chitin is the hardest all-natural material known to man, which makes it
impossible to digest without proper preparation. A properly prepared
tincture releases these beta glucans and makes them available for human
consumption.

Here’s the way to prepare your Chaga tincture

How Much Chaga Tincture Should I Take?

Remember, when it comes to Chaga Tincture, you don’t need very much. 1/4 tsp added to an 8oz drink twice daily is plenty.

I have been personally using Chaga for the past 3 years or so, and I
can attest without a doubt that it makes me feel better overall. If I
don’t take it for a few days, I notice a drop in my stamina when I’m exercising.

Also, I don’t know if there is scientific proof to back this up, but I
feel that it is easier to build and maintain my muscle mass. Being in my
mid 50’s, I want to slow the muscle loss in my body as much as I can. The Chaga has helped me to do that.

I was a high-stress, high-anxiety type person, but since I have been
using Chaga, my anxiety and stress levels have definitely decreased. I
know that this sounds a little bit like a grand sales pitch, but I just
wanted to tell you how the Chaga has helped me. Maybe it can help you too.

If you are in your 50’s or older, I highly recommend that you give the Chaga Mushroom a try.
Stay healthy everyone.

I invite your input, please leave a comment in the space provided